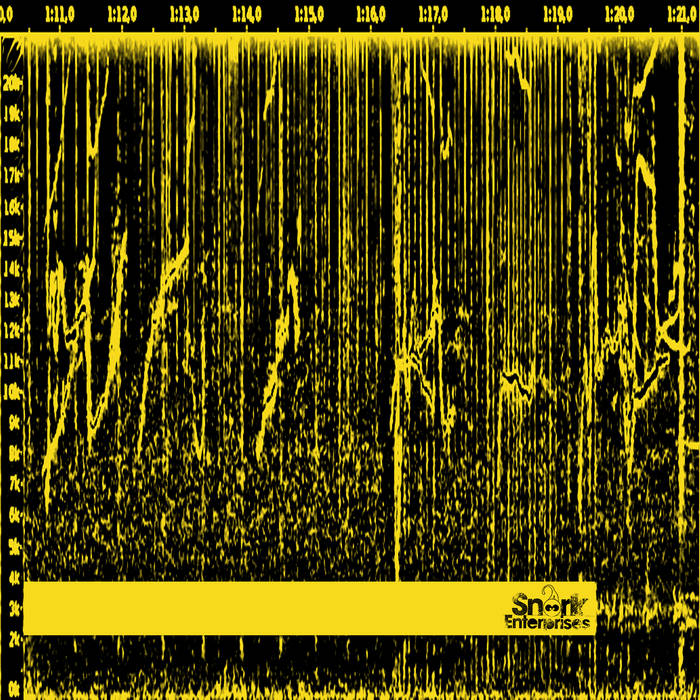 SPECTROGRAM
Tokyo. Berlin. Hamburg. Snork #107 is a best-of-journey through the underground techno sounds of vibrant metropolitans. Five tracks with five totally different sounds – each handpicked by label owner and underground enthusiast Christian Schachta, and each a masterpiece of its own.
Starting off with the Hamburg based techno duo 7Function, the release directly reveals the true force of handmade basement techno: hard, headstrong, and honest. Straight outta Tokyo but with a reminiscent core of 2000s Berlin sound, Lyoma presents an energizing track that knows how to bounce. With “Um Midi” his fellow Mitchelrock, also Tokyo-based, proves his peculiar sense of experimental, minimalistic tunes.
NerkKirn from Berlin open up an enlightening early morning track. And last but not least, as digital gimmick, label owner Christian Schachta aka Syntax Error adds a wonderfully tricky, typically snorky track leading to melancholic memories and hopeful anticipation of many sweaty club nights.

VARIOUS ARTISTS
7FUNCTION
7Function is the result of some vigorous production sessions by the two hardware master heads Christian Quast and Christian Schachta. What started off as a casual Thursday night turned into a perfect conjunction of two proven electronic music artists – and finally into a proper genuine techno project.
Having started in the 90s, both look back on a longstanding techno career and bring along the spirit as well as the roughness of the era. Merged with technical skills, ambition and new inspiration, they create a massive sound. Sometimes it comes along stomping, sometimes driving. Yet, at any time it is characterized by darkness and determination. And for sure, you cannot deny the genuine hardware sound that it originates from.
Christian Quast has started his music career with the roots of music software on Commodore C-64 and later Amiga 500. Long nights in the clubs of Hamburg, especially in the UNIT, shaped his affection to technoid sounds. His style is known for combining harder sounds with such modern melodies creating a thrilling mixture that is appreciated by various kinds of people. After his first live acts in 1995 with the project Aural Seduction and later with Propan, he has been following his path as producer, label manager and owner of his own music production & distribution company Futureaudio GmbH. He has released his own music on labels like BPITCH Control, Missile Records, Force Inc., Safari Electronique, Kickboxer, Glückskind Schallplatten and more. Even though his musical path turned into a serious profession, the productions remain peculiar and far away from mainstream.
Christian Schachta may be something like the Jack of all trades of the underground techno scene. From the late 90s on, he engaged in various activities such as DJ, live act, producer, party organizer, and of course manager of several labels. His most renown project is the label Snork Enterprises founded in 2004, which has shaped the underground techno scene worldwide not only with its catchy black and yellow design but especially with its signature sound. Among its artists are famous names such as Neil Landstrumm, Jens Zimmermann, Phil Kieran, DJ W!ld and Konstantin Siebold. Yet, whenever they are releasing on Snork you can tell by a certain grooviness and trickiness they add in. As a producer himself Christian Schachta aka Syntax Error has also developed his very special sound favoring deep wobbly bass-lines, harsh snares, FM tones and drones, deep bass drums and tricky percussion. After having supported numerous renown as well as newcomer artists with his labels Snork Enterprises, Feinwerk, Relax2000 and UNDERtheGROUND Records in the last years and by the way having cracked the catalog number #100 with Snork, Christian is now focusing again on his own productions and spends valuable time with his hardware.
www.7function.com

LYOMA
He is a mediator between two worlds. Lyoma clearly represents the Tokyo underground techno scene. At the same time, having lived in Berlin from 1998 to 2007, he also has a strong inclination to the German, especially the Berlin techno scene which he knows pretty well. In 1999, while he was still living in the German capital, Lyoma started the techno party "abend" based in Tokyo, and in 2011 he founded the related "abend kollektiv" label. His first track was featured on the PLATIK label's compilation album "Gathering Traxx Vol.1" in 2007, and since then his other works have been released by labels such as BASS WORKS RECORDINGS, TOTEM TRAXX, and SNORK ENTERPRISES. He was also a resident DJ at the party "STERNE" at Shibuya WOMB for 6 years since 2012, and currently runs "BOOGIE" at Shibuya CONTACT, and "abend" at Shimokitazawa SPREAD.

MITCHELROCK
He is the true master of hardware. Seeing him twisting and turning the bits and pieces of this modular system is pure joy for all hardware-lovers and an entertaining live act in his very own way. No wonder, the Tokyo-based electronic music DJ and producer is deeply-rooted in music.
MITCHELROCK’s musical development began when he started playing bass guitar at the age of 14. Drawing influence from blues, metal and experimental music, he explored the artistic possibilities in recording equipment such as cassette tape MTR and MOTU Performer. After encountering industrial music in the late 90s, his focus shifted towards electronic music. In 2006 MITCHELROCK started DJing at clubs and parties in Tokyo and finally in 2017, he started performing live minimal techno using his signature hardware-only setup.

NERKKIRN
„NERKKIRN is what happens when you pair two very different electronic musicians with a shared passion for warping sonic technology - and set them loose.“ Yet, speaking of paths, it has always been the new and experimental approaches that kept Nerk aka Benjamin Weiss and Peter Kirn moving and finally formed their intersection.
Having founded the legendary Berlin rave act Tok Tok, Benjamin Weiss has been an innovative artist within the techno scene for many years now, including releases on Kompakt, Klang, and V-Records, often in collaboration with Dirk Leyers, as well as the co-creation of a new iPad step sequencer.
As a classically trained experimental musician the Kentucky-born Peter Kirn has been working in a wide range of fields such as modern dance, ambient audiovisual shows, as well as piano and underground experimental techno. Yet he might be best known as co-creator of the MeeBlip synthesizer and as the editor of CDM (createdigitalmusic.com). Again a common space he shares with Nerk, founding editor of De:bug.
www.facebook.com/nerkkirn/

SYNTAX ERROR
Exactly this world of the deep and groovy techno music is the well-known territory of Christian Schachta aka Syntax Error. Having started as techno DJ in the late 90ies, he soon found his very special sound favoring deep wobbly bass lines, harsh snares, FM tones and drones, deep bass drums and tricky percussion. Like a syntax error, he breaks with commonplace regularities and creates a wholly new sound experience that is highly recognized within the techno scene.
Up to 2020, he has produced over 20 different 12” releases on the labels Snork Enterprises, Feinwerk, Relax2000 and UNDERtheGROUND Records. Each of his releases is an authentic, passionate creation of sound always mirroring some experience from his personal life – whether it’s from his adventures as scuba diving tycoon, as sonar operator or as DJ and producer enthusiastically roaming the techno club scene. In 2018, the finally realized his dream and went on his first Japan tour performing amongst others in the well-known Contact Club in Tokyo and live on air on the famous Japanese media platform Dommune.
Since he moved to Hamburg in 2014, Christian Schachta also engaged in a couple of new techno projects besides this signature alter ego Syntax Error. Together with his techno buddy Christian Quast he started the experimental techno satire Classic THE FIST as well as the project 7Function exclusively starring on the legendary label Force Inc and also the new techno duo Series.
www.facebook.com/TheRealSyntaxError/